In the biological treatment stage, the mechanically treated wastewater flows through the biological phosphorus elimination tank (anaerobic tank), the denitrification tank (anoxic tank), nitrification tank (aerated aerobic tank) and the secondary clarifiers. This is where carbon, nitrogen and phosphorus are reduced. The actual treatment process happens here, as in nature, by microorganisms who metabolize the dissolved and finely dispersed contaminants or, largely adsorb the extracellular polymeric substance creating sludge flocs The activated sludge is overall alternatingly exposed to anaerobic and aerobic (oxygen) environments. This creates the right conditions for an increased phosphorus absorption by the microorganisms which, in turn, reduces the phosphorus content in the waste­water. Phosphorus is then removed together with the excess sludge. Nitrification:
Wastewater primarily contains nitrogen in the form of ammonium (NH4-N). In the aero-tanks (aeration tanks), ammonium is converted to nitrate by the microorganisms (nitrosomonas & nitrobacter) contained in the activated sludge. In the secondary clarifiers, the sludge is separated from the water. The sludge flocs that were created in the biological and chemical treatment steps sink down when the flow rate decreases. The scraper pushes the settled sludge into a sludge hopper where it is thickened and pumped back into the anaerobic tank by the return sludge pumping station. The mechanically, biologically and chemically treated wastewater then goes to the adsorptive treatment stage. 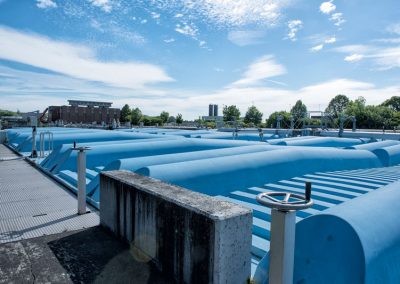 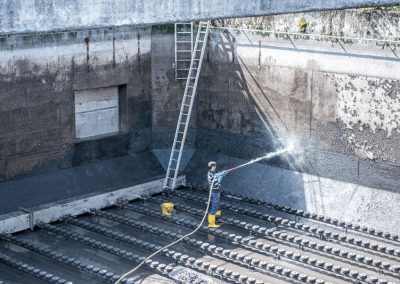 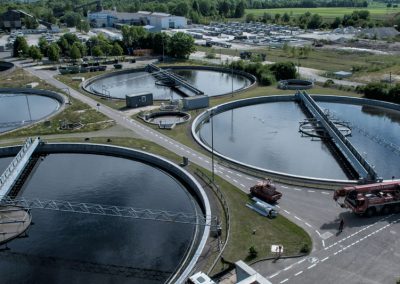